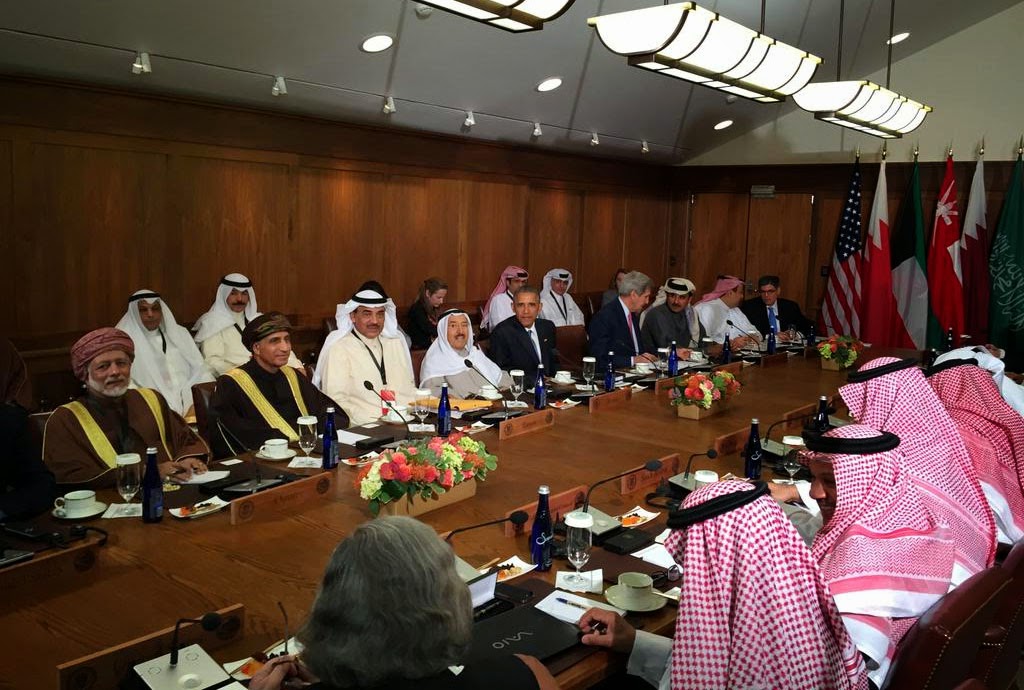 May 20, 2015
By Ali AlAhmed
President Obama hosted a historical summit, the first of its kind between a US president and all six Gulf monarchs. The question to ask is: to what end? Will it be limited to the three stated issues of ensuring the security of the GCC vis-à-vis Iran, military cooperation, and countering terrorism? Or will it actually reshape its awkward relationship with these regressive authoritarian monarchies?

This summit was an important event for the ruling families of the Gulf countries who are trying to survive the political upheaval in their region, and they are looking to the United States to ensure their survival against all odds. But the continued rule of the largest block of absolute monarchies in the world may not be good for the United States. Here is why:

Carter Bleeds America
Let’s start with how much American taxpayers are paying to protect the Gulf regimes. Princeton University Professor Roger Stern estimated the cost of the security that aims to keep the Gulf oil flowing to the world markets to be around $7.3 trillion over the three decades from 1976 to 2007, an average of $225 billion a year, nearly five times the total value of annual Saudi exports of petroleum products to the United States. To be sure, the $7.3 trillion number does not include the cost of the 2003 war in Iraq.

Plan of Action
It is high time to turn a critical eye to this arrangement and ask: what exactly is the US getting out of spending the equivalent of two times its annual budget and greater than the 2014 of California and Florida combined? Why is America stuck with an outdated, irrelevant policy that bleeds its tax revenues for no good reason?

The American Burden
Beside the astronomical cost that the US is bearing to safeguard the Gulf monarchies, they have not served US interests as they would like us to believe. GCC policies have been a leading source of US policy failure in the Middle East, including terrorism and Anti-Americanism. That’s why it is time that Mr. Obama abandons the outdated “Carter doctrine” in the Middle East, an ill-conceived concept that gave birth to Al-Qaeda and violent extremism, and empowered the most regressive regimes in the Middle East.

Nearly all of the US wars in the Middle East have been waged on behalf of, in defense of, or because of the Gulf monarchies. Since the attacks of September 11, the United States waged two major wars in Afghanistan and Iraq that are still ongoing, and have already cost the US over a trillion dollars and thousands of American lives, not to mention the lives of hundreds of thousands of people in those countries. These wars would have not been necessary or have ended quickly if the Gulf monarchies were not providing assistance to anti-American terrorist groups that brought about September 11 and its aftermath.

It is no secret that the Saudi Arabia, Qatar and Kuwait are the grand central stations for providing financial, ideological, and manpower to the most dangerous terrorist groups including ISIS, Al-Qaeda, Al-Nusrah and others. Seventeen out of the nineteen hijackers came from the Gulf countries (15 from Saudi Arabia and two from the UAE). And things have not improved – just compare terror threats and power between September 11 and now. Sadly, it was the American coddling of GCC monarchies encouraged them more to continue supporting terrorism.

The Qataris and Saudis were behind the sustained Sunni insurgency against post-2003 Iraq.
In a 2005 exclusive report, NBC aired an audiotape of the Saudi chief justice Saleh Al-Luhaidan encouraging Saudi men to join Al-Qaeda in Iraq to kill American forces. Mr. Al-Luhaidan kept his job for six more years after that.

And so, with their government’s quiet support, thousands of Saudi nationals joined Abu Musab Al-Zarqawi’s war on American soldiers and Iraqi society. Yet we hear American officials say that the Saudi government should not be blamed for the thousands of their citizens who are waging terror attacks and even full-blown wars around the world.

In addition, despite the flashy PR campaign on the success of “re-education”, thousands of Saudi nationals joined known terror groups in Syria, Iraq, Yemen, Egypt, Afghanistan, Pakistan and other countries after 9/11. Many members of Al-Qaeda are sons and relatives of Saudi notables, including the nephew the Saudi grand mufti, the nephew of director of the Saudi terrorism re-education program, and the son of the commander of the Saudi Royal Guard.

Ungrateful Kuwait
Although American forces liberated Kuwait in 1991 and restored the Al-Sabah ruling family, Kuwait has been a major source of funding of violent terror groups over the past few decades, including contributions from the government coffers. Hundreds of Kuwaiti nationals have joined ISIS and other terrorist groups. So far, the Kuwaiti government has not prosecuted or arrested any of the known terrorists or their funders. Instead, they have gone after Twitter users and human rights activists, including those who criticized terror groups — such as attorney and former member of the parliament Khaled Al-Shatti, imprisoned last month for tweeting against ISIS and facing a death penalty trial on that charge! On the other hand, all of the fundraisers for ISIS and Al-Nusrah, including some government officials, remain free.

Qatar Terror Cup
Qatar’s role in supporting several terrorist and extremist groups cannot be overstated. In fact, it has been competing with the Saudi government in providing all types of assistance to Al-Qaeda and its sister groups, including Al-Nusrah. Despite funding the most powerful and sophisticated extremist mouthpiece in the world, AlJazeera Arabic, the Qatari government arrested BBC reporters
this week who were interviewing Asian migrant workers enduring slave-like conditions. Aljazeera Arabic, a Qatari government mouthpiece has been providing strategic assistance for the terrorist groups that its government supports – including Al-Nusrah and Al-Qaeda – under the guise of freedom of the press, while banning many progressive thinkers, including this writer.

Terrorism Galore
That’s why it’s time for the US to include GCC support for terrorism in their discussions, and scrutinize the Saudi, Qatari and Kuwaiti governments’ active and passive roles in supporting terrorism. This should start by acknowledging that ISIS and Al-Qaeda terrorism grew with explicit support of some of the GCC governments. Vice President Joseph Biden already acknowledged this in his Harvard University speech, but was swiftly pressured to apologize.

Human Rights Black Hole
In addition to curbing GCC-supported terrorism, the US should push these monarchies to open up their political systems to people’s participation. The Gulf countries are virtual police states with no or limited role for self-government, where the smallest infraction can land you in jail for many years, or even get you shot by death squads. There are no political parties, no free elections, no freedom of the press, and no respect for human rights especially those of women, minorities and blacks.

Heeding the words of the great American President Abraham Lincoln in his Gettysburg Address, “government of the people, by the people, for the people”, the US must push for the rights of the people in the Gulf countries so they can take the lead in running their nations – as the American founding fathers made possible for the American people.