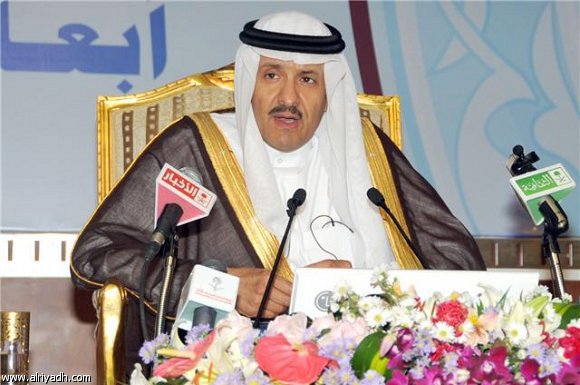 The Institute for Gulf Affairs has learned that Saudi King Abdulaziz is traveling to New York City for medical treatment at New York Presbyterian Hospital after a brief visit to Morocco. The 76 year old Crown Prince Salman will be the acting head of state while the 89 year old Abdullah leaves abroad for his “private vacation.”

This news comes on the heels of the 71 year old Saudi Foreign Ministers hospitalization in early August from an intestinal surgery and a stroke. It is easy to allow the graying of the Saudi leadership to go unnoticed. This is largely thanks to a copious amount of makeup and dye which keep the leaders in this geriatric regime looking decades younger than they really are.  Even as the King hobbled to his plane, hunched over and gripping a cane in his left hand, he hardly had the face of a man pushing 60, much less 90.

Who is the King’s Deputy?
Prince Salman has a long history in the Saudi government dating back to his appointment to the position of the emir of Riyadh in 1954. Salman was 19 years old at the time. Salman continued to serve in various positions in Riyadh until 2011 when he was appointed the Defense Minister. Seven months later he became Crown Prince following the death of his full brother Naif. While Salman has a history of strong economic development from his half-century building up the Riyadh province, his age is only slightly less worrisome than that of the man he is standing in for.

The Aging Monarchy
King Abdulla underwent back surgery at New York Presbyterian Hospital on November 2010. In the time since, he has reduced his public exposure and has been seen walking with the aid of a cane.  The next two heirs apparent in the Saudi line of succession, Crown Prince Sultan and Prince Naif died within months of each other at the respective ages of 81 and 79. With most of the countries bureaucracy being run by a royal appointee born between 1930 and 1960, the line of succession is shrinking.

Although there exists a third generation of descendents from the nation’s first king, King Abdulaziz, there are too many of them which makes for an intense competition. As the eldest generation of the ruling elite enters its twilight years, the Allegiance Council has so far failed to set contingency plans for the future leadership of the Saudi state. The Allegiance Council has 34 members, all of whom represent the family of one of King Abdulaziz’s sons.

Looking Forward
The appointment of Prince Salman as the Crown Prince and his selection to be the nation’s interim leader indicates that he may be slated for the day -to- day running of the state affairs as the King’s health continues to diminish. The monarchy may be undergoing a graying crisis but this does not mean that the values instilled by these elite and elderly leaders will go away soon. The illusion of reforms will remain a mirage off in the distance of Saudi Arabia’s endless sands. It remains uncertain how many years more the world must wait to see the Saudi throne occupied by a King born later than 1960. The latest appointment makes one thing certain; the Saudi establishment will compartmentalize its power generationally until they have been truly left with no other recourse.

A Conflicted Council
The Saudi ruling family numbers around 20,000 members, making conflict between them unavoidable. The likelihood of conflict is becoming increasingly abundant in this family as they decide who will take the helm of this absolute monarchy. Differences within the family over religious propensity, disposition towards the west, popular political participation, economic development and human rights are multiple reasons for members of the House of Saud to cast doubts upon each other’s ability to lead the state. The greatest source of ire amongst the family concerns the division of Saudi Arabia’s wealth and land. With 20,000 princes in contention, there is not enough land and money to go around. The appetite of the ruling family is greater than what the country can offer.

La corruption royale
Corruption within the Saudi regime is endemic and systematic. The line between the nation’s wealth and the ruling family’s personal wealth is blurry.  Corruption within government has reached its highest level ever since 1932 and has dramatically increased under the reign of King Abdulla causing major economic calamities such as the collapse of the stock market in 2006 which was masterminded by members of the ruling family. The crash erased 350 billion dollars or 55% of the market value. The ruling family’s push to grabbing power, wealth and land has resulted in an unemployment rate of over 40%, and poverty rate of and over 25%. Land grabbers from the ruling family have fenced most of the usable land in the country. This is why housing ownership in the Kingdom remains one of the lowest in the world at less than 24%.

Protests in relation to land grabs by members of the ruling family have been held in the Jazan and Taif, while dozens of unemployed youths have committed suicide in past months.

Rising Republics Challenge the Monarchy
The growth of Egypt and Iran to Saudi Arabia’s east and west poses a unique challenge to the royals. Both countries pursue republican models and have relatively popular and energetic leaders. The Iranian economy has been benefitting its people while the Egyptians have embraced the democratic model and elected Mohammed Morsi. The distribution of wealth and democratic governance are anathema to the Gulf monarchies which have had little experience with both. Saudi Arabia’s successful economy will mean little to its people if the national revenue fails to trickle down to 27 million Saudi people.

The monarchy determination to hold absolute power is self-destructive. While Iran, Egypt and Turkey stand as exemplars of popular participation in government, Saudi leadership is incapable of meeting the needs of the population. In order for the regime to survive, 20,000 royals will need to settle for less in favor of the greater good of the nation. Though the idea is innately dubious, the failure to adjust their mindsets could result in perpetual and growing unrest. Born into a life of unlimited wealth and decadence, the younger generations of AlSaud are less willing to share it with the people.

A Review of Karen House’s “on Saudi Arabia”