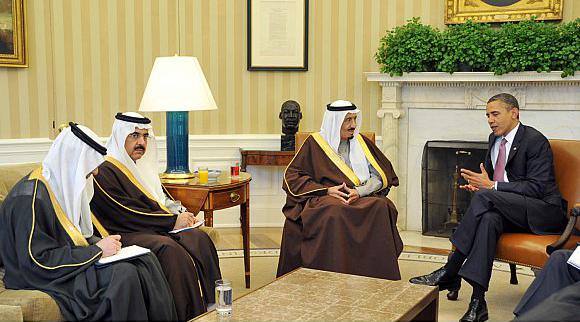 September 8, 2015
By Akhil Shah
Saudi Arabia has, at the best of times, been slow to uphold its end of the relationship it shares with the United States. The visit of the King Salman provides President Obama with a clear opportunity to change the dynamic of the Saudi-American relationship.

In a changing Middle East region, Saudi Arabia is more reliant on the United States than it has been before. Internal forces within the Saudi state are worried about Iran and the threat posed to its regional hegemony. In his last year, in his final term as President of the United States, Obama can raise a number of points with Salman of Saudi Arabia.

The Middle East currently faces a number of major issues. Terrorist groups, fighting in the name of Islam, continue to threaten regional allies as well as American interests in the region. Saudi Arabia has continued to foster the conditions for extremists to flourish in. Recently, in Yemen, the Saudi forces fought alongside Al-Qaeda backed militias against the Houthi rebels. Beyond this, a number of Saudi princes have questionable ties and share many views with the leaders of terrorist groups. Indeed, one only need look at the similar outlooks of the Saudi state and Al-Qaeda or ISIS to understand how extremist views are being cultivated. Since 2009, when then Secretary of State Hillary Clinton designated Saudi Arabia the largest financier of international terrorism, little has changed. President Obama should consider putting this at the top of the agenda when he meets King Salman; this is especially true considering that the Crown Prince, Mohamed bin Nayef, is seen as a counterterrorism expert. American interests in the region require a stable Middle East. Saudi Arabia, as a key ally, needs to do more to prevent the spread of terrorism.

Beyond the prevailing military issues, there will be economic issues that need to be discussed. In particular, oil prices and stability are likely to be high on the agenda. Currently the cost to U.S. producers of oil is significantly higher than that of their Saudi counterparts, in large part due to method of extraction. With Iranian oil about to flood the market, prices will lower and output will increase. Saudi Arabia will feel threatened and Obama must appease their worries. Over the last year and a half the Saudis have artificially lowered the price of oil in order to expand their market share. However, with the nuclear deal signed, Iran will begin to erode Saudi Arabian dominance through increasing global output significantly. The Saudis, in order to maintain their supremacy, may once again seek to keep oil prices around the $50 mark by withholding output. If this were to extend for another year and a half, American oil producers would be negatively affected. They would be hampered in any efforts to make profits as, currently, it is estimated that oil prices need to be $61 for U.S. producers to break even.

Finally the arrival of the Saudi king provides Obama with the perfect opportunity to bring human rights issues to the top of the agenda. The reliance of Saudi Arabia upon U.S. security is increasing and allows the President to push harder on human rights issues. Not only have a number of opposition politicians and human rights activists been jailed unfairly, but the Saudis already passed their own record for executions in a year in just six months. Obviously there is a cultural difference and Sharia law is prevalent in the Kingdom. Despite this, there have been a number of high profile arrests made of certain activists whose crimes have simply been to call for democracy. There is no reason why President Obama cannot raise this issue with the King without causing offence. America is the land of the free, where all are equal and freedom of speech is an enshrined right. Saudi Arabia is no longer the critical economic partner it once was. The U.S. is becoming self-sufficient in terms of oil production and need not worry about offending the Saudis through diplomatic channels.

Barack Obama has a great opportunity to make a real difference in the Middle East. Until now, the great hope he was going to bring to the region and the reality stand apart. By changing the dynamic of the Saudi-U.S. relationship, he will help to bring greater stability to the Middle East and create a legacy he can be proud of.