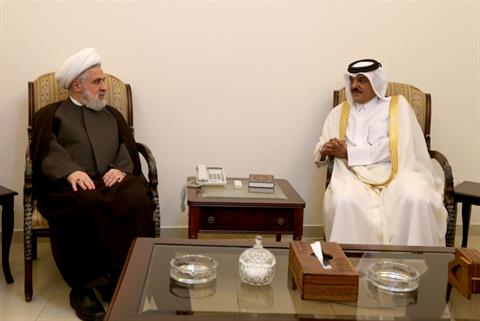 While it is widely accepted that “private donors”, aka Qatari officials, are funding the Syrian Al Qaeda affiliate Jabhat al Nusra, Qatar has recently begun hedging its bets in the Syrian conflict. In an unanticipated development last week, Hezbollah’s Second in Command, Sheikh Naim Qassem received Qatari ambassador Ali bin Hammad Al-Marri in Lebanon. The meeting marked the first time the two sides had had in several years since the start of the Syrian uprising. The obvious question is why Qatari officials would be supporting the extremist opposition in Syria while also meeting with the leadership of Hezbollah, who stands firmly behind the Assad Regime?

The answer is quite simple: the Qatari’s are playing both sides in the Syrian conflict. Sooner or later, the war in Syria will end and one side will prevail or at least dominate the country. Qatar is making sure that no matter who wins, it comes out on top. The idea of an Islamic State in Syria may be appealing to the “private donors” of Qatar, but the geopolitical reality of an Assad victory puts the Qatari monarchy in a difficult spot after the fall of the Muslim Brotherhood in Egypt.

The Qatari’s need another partner in the region and that partner will be found in Syria, regardless of the outcome. Prior to the Syrian uprising Qatar enjoyed strong relations with Damascus; Qatari Emir bought a summer residence there where both the Al Thani and Assad families fostered close ties.

Qatar is also trying to counter the influence of its archrival, Saudi Arabia, in the region by reaching out to one of Saudi’s strongest adversaries, Hezbollah. The two Gulf States have a very interesting relationship that can be compared to one between a big brother, Saudi Arabia, and a little brother, Qatar. The sibling rivalry taking place in the Gulf makes for very interesting foreign policy decisions, as evidenced by Syria. They both have common interests and long term goals; however the little brother hates being bullied by the big one. Qatar has no interest in being told what to do by the Saudis and the Saudis do not want to put up with the annoying little brother to their south getting in the way of the big kids power game. Qatar would much rather compete with the Saudis than do what they are told, even if they do not have the resources to do so.

The meeting between Hezbollah and the Qataris officials may also signify the developing realization that Assad may not win the war in Syria, but he certainly will not lose. The opposition is fragmented, unorganized, and is more concerned with infighting than fighting the common enemy. This is evident in the Assad victories in recent months and their push to take back Aleppo. In fact, last month internet and power were restored to parts of the besieged city which indicates that the government had the time to start addressing infrastructural concerns. It is likely that Qatar has gathered enough information from ground sources that indicates victory for the rebels in Syria is becoming more unlikely and took the opportunity to meet with Hezbollah to solidify its good standing with the potential victors. In the past few weeks, Qatar sent letters to the Syrian government but was rebuffed. Reaching out to Hezbollah, Assad’s close ally, may be the only way to get their voice heard in Damascus.

Whatever the reasoning, the Qataris have made their intentions clear. They have gone into survival mode, a status all small nations must endure when regional balances are shifting and the future is unclear. If it means inking a deal with the devil, so be it, as long as Qatar successfully weathers the storm that is Syria after the conflict ends or is put on the back burner. Small states need larger powerful countries to provide them with political and/or military protection. In the past, Qatar has relied on Saddam’s Iraq, Iran, and the Muslim Brotherhood controlled Egypt, but now that those countries are experiencing instability and uncertainly as well, the Qataris need a new alliance to help them survive in the dynamic Middle East and the protect them from their aggressive Saudi neighbor. Qatar is gambling on the future of Syria for their independence from Saudi interference.

Welcome to this episode of ‘Survivor Syria’, coming to you from the gambling capital of the Gulf, Doha.