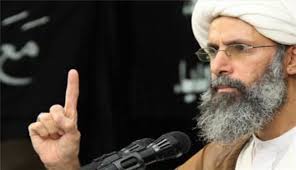 February 4, 2015
By Ali AlAhmed
Washington DC – Mass executions in Saudi Arabia last month shocked many across the world except Sheikh Nimer AlNimer, a prominent Shia cleric who was among those executed. He was my friend. He foretold of his death at the hands of the Saudi Monarchy he despised and wanted to see overthrown.
True to his name – “Nimer” means “tiger” in Arabic – he spoke forcefully and openly about the Saudi absolute monarchy and the humiliation it visits on its population, Shia and Sunni alike. In many of his speeches, he described the monarchy as an oppressor who stole dignity and security from the people. He was a unique voice in the country who broke the barrier of fear carefully built by the monarchy over the decades to silence dissent and ensure its absolute hold on power.

AlNimer, who led protests in the oil-rich Qatif region, called for greater rights not just for his Shia community but also for the entire population in Saudi Arabia. He wrote of human dignity, justice and civic and social peace, and of religious freedom. In his 2007 “Petition of Honor and Dignity” to the Saudi government, he laid out his demands for the civil rights of the Shia community, who remain shut out from all meaningful representation by the Saudi state at all levels.

The Shia in Saudi Arabia are the largest Shia minority in the Middle East. While they are concentrated in the oil-rich parts of the country, they remain on the fringe of Saudi life and are largely excluded and marginalized at all levels of the official institutions. To put this into the British context, as London is set to elect its first Muslim mayor, there is not a single Shia mayor in Saudi Arabia. There are no Shia in the Saudi judiciary, diplomacy, security apparatus, or the ministerial cabinet. Saudi courts routinely reject even the testimony of Shia, and at times, jails Sunnis for having too-close of a contact with Shia’s such as the case of Sunni Muklef AlShammari who has been jailed and sentenced to lashing over it. There is no doubt that the Saudi government thrives on creating barriers between the two sects to prevent their unity against its rule.

In a private meeting in Washington I had with the former Saudi crown Prince Muqrin, the head of Saudi intelligence at the time, I asked about the reasons the Shia community is excluded from public life. I told him that once the state extends its hand, they will find that the Shia will act like any minority that will tie its camels to the state to protect itself. He had no answer but to say he tried to hire Shia at the National Guard’s hospitals. The Saudi Monarchy’s ideology blocks it from accepting that Shia’s –as all others- need more than to remain alive and bellyfull to support or accept the monarchy.

The timing of the executions tells us why they were carried out. They came just four days after the 2016 budget numbers were announced, showing a shrinking budget, significant deficit and increased gas and electricity prices. The promises of prosperity that were given at the coronation of King Salman 11 months ago have vanished, so the monarchy needed a major event to redirect Saudi domestic audiences’ attention, anger, and disappointment away from these failures.

On the foreign policy front, the Saudis are increasingly disillusioned by their government’s mounting failure in their war on Yemen to restore the ousted Yemeni president Hadi, their project in Syria to oust Assad, to gain a foothold in Iraq, and the Iranian success to lift most international sanctions after signing the nuclear deal.

Having been stuck on many fronts, the Saudi government acted with haste and executed Nemer and others, something I am certain they will come to regret. In the words of Dr. Abbas Khadim of the Shia Studies Institute in Washington, “the Saudi monarchy just gave the Shia their own martyr saint.”
While it fears the Sunni majority the most, the Saudi Monarchy has used the Shia as the bogeyman and the scapegoat. The recent executions were clearly carried out to shore up the stability of the monarchy in face of domestic pressures by terrorizing the population and silencing the voices of dissent.
The stage is now set for instability in Saudi Arabia and 2016 will give us a lot to write and talk about.

Ali AlAhmed is the director of the Institute for Gulf Affairs