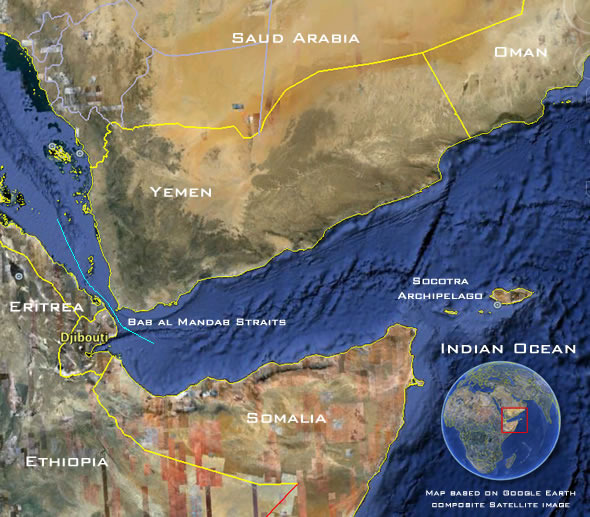 By Daniel Morillo
14 October 2013
Washington DC- Al Shabaab and Al Qaeda in the Arabian Peninsula (AQAP) are separated by the narrow Mandeb Strait dividing Horn of Africa and Yemen. Though both are endorsed and supported by a weakened Al Qaeda core believed to be situated in Pakistan, they hold slightly different goals representative of their host countries. The notion of an Al Qaeda affiliate controlling both sides of the Mandeb Strait and threatening regional and international security may seem rather apocalyptic, but in reality the foundation has already been laid for such a partnership The two networks have been in communication and cooperation for some years now and it is no secret that they exchange ideas and, on occasion, personnel. Somali’s have been found fighting in Yemen with AQAP while Saudi’s and Yemeni’s have been discovered fighting alongside Al Shabaab in Somalia.

Both AQAP and Al Shabaab have proven that they are capable of recruiting American’s to fight for them, demonstrated by the deaths of Omar Hammani, or al Amriki, in Somalia this past September and Anwar al Awlaki in Yemen in 2011. The interlaced network of equipment and human capital trade and the potential danger posed by such a joint venture might serve as the impetus for the realignment of American anti-terror resources.

The United States has been actively involved in a drone war in Yemen for some years now but the recent Navy SEAL raid in Somalia and President Obama’s concurrent statement signify a new shift of focus in the larger ‘War on Terror’ from Afghanistan and Pakistan to Africa and the southern Gulf Regions. As the war in Afghanistan winds down, the nature of American anti-terrorism efforts will shift to a region that has been heating up for some time now but is finally about to reach its boiling point. Until recently, most Americans probably had never heard of Al Shabaab, nor had they any idea that the United States had been raining lead down on AQAP leaders in Yemen from the belly of a drone since 2002. The relatively quiet drone war in Yemen has failed to make major headlines. However, since Obama took office, drone strikes have significantly increased in the past two years, with 42 attacks in Yemen in 2012 according to the Long War Journal. The hushed nature of the drone war in Yemen has been fortunate to evade the media’s attention and thus not made many waves in the public’s general anti-war sentiment.

The pivot of anti-terror efforts will certainly draw more attention to the Mandeb Strait region coming months and the greater African and southern Gulf regions in the coming years. More importantly, this shift indicates the broader belief that terrorism is gaining a foothold in the lawless regions of failed Arab states like Yemen and African nations such as Somalia. For years, experts have warned of such an occurrence and American intelligence communities have been actively involved in fending off the encroachment of Al Qaeda in the region. But with the world looking at the conflicts in Afghanistan, Iraq, and now Syria, it seems that terror networks have taken advantage of the metaphorical blind spot in the failed states of Africa and Persian Gulf. As these regions are allotted more resources in the fight on terror, we can only wait to see if the United States will be playing catch up, or if the quiet wars in Yemen and Africa waged by drones and clandestine operations did enough to keep the United States one step ahead. One thing is certain though, as conflicts in Afghanistan and Syria come to an end in coming years, those Al Qaeda fighters will need a new conflict in which to utilize their combat-tested skills. Their decision may push the region to brink of a broader regional conflict.